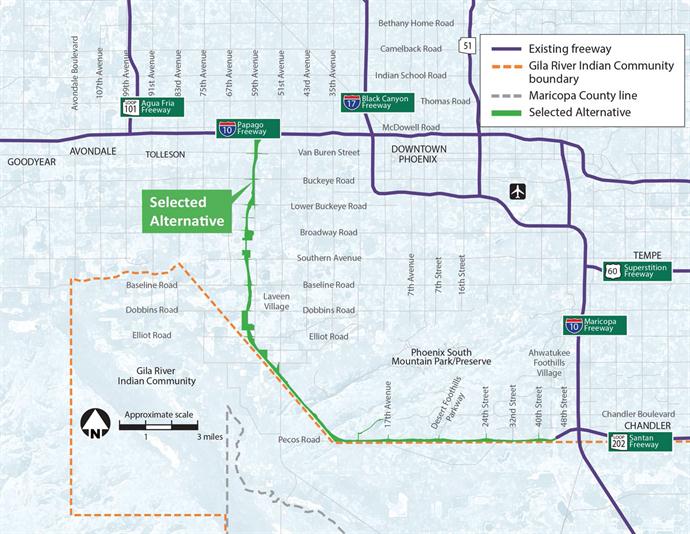 Just as state transportation representatives began the first steps in starting construction on the long-anticipated Loop 202 South Mountain Freeway project, negotiating with property owners along the route and taking soil samples, opponents filed a lawsuit on environmental grounds seeking to stop the work.

Many members of the nearby Gila River Indian Community also have been vocal against the construction, citing cultural and religious concerns.

The Federal Highway Administration gave final approval March 10 with a Record of Decision that allows the Arizona Department of Transportation to begin acquiring land and completing final design plans. However, a coalition led by Protecting Arizona’s Resources and Children (PARC) filed suit May 19 in Federal District Court in Phoenix charging that federal and state transportation officials failed to adequately consider environmental and health impacts of the project.

“We have been preparing for this for a long time,” said Pat Lawlis, an Ahwatukee resident and president of PARC.

Supporters say the freeway is essential to easing congestion on existing roads in Phoenix, particularly Interstate 10 and surface roads running parallel to the I-10. When completed, the 22-mile length of road finishes the Loop 202 and Loop 101 freeway system.

“I am aware of the lawsuit filed by various groups against the Loop 202 South Mountain Freeway,” said City Councilman Michael Nowakowski, whose District 7 constituency includes Laveen. “There are more people in support of the freeway than those who oppose it as evidenced in the more than 8,000 public comments received during the community outreach process.

“This freeway has been planned for 30 years. The positive economic impact this freeway will bring to this region will result in more businesses opening up their doors in the Laveen, South Mountain and Estrella communities,” Nowakowski said. “It’ time to build the freeway, bring in businesses and create jobs.”

Nowakowski and Councilwoman Kate Gallego, whose District 8 also encompasses South Phoenix, both have been vocal supporters of the positive economic development impact. Many proposed economic development plans in Laveen are tied to the eventual completion of the freeway, such as a movie theater, a trauma center, a possible Target and other businesses.

“Without the freeway, we will get none of those proposed developments,” said Stephanie Scovell, a member of the Laveen Village Planning Committee. “People want to see more activities for our children, like a movie theater.”

Scovell said the freeway has been nearly a monthly topic since she joined the board five years ago. The committee is made up of Laveen residents, appointed by the Phoenix City Council, who meet regularly to discuss issues affecting the area and make recommendations to the council.

“I don’t think the lawsuit will stop it,” Scovell added, “but it will force ADOT to show that they’ve crossed all their t’s and dotted their i’s.”

Nindi Wadhwa, said that as a small-business owner and Laveen resident, he is hopeful the project will bring a financial boost for the area and his local ice cream store, Scooptacular.

“We need more investment that will bring value to our community. I hope developers will see what Laveen has to offer and bring us unique and trendy restaurants not just more chains,” Wadhwa said.

“Our goal with Scooptacular is to invest in our community, employees, and to help put Laveen on the map. We offer a unique concept by making all of our ice cream in-house. We love being a part of the Laveen community.”

Laveen resident Robert Janca is definitive in his support. “I’ve been in the transportation industry for 20 years. I manage the Transportation Department for Core-Mark International in Phoenix. I can tell you firsthand what kind of impact the freeway will have. Freeways are the life-lines of my industry.

“In short, the harder it is to move goods the higher the cost to consumers,” Janca said. “When goods can flow freely, the costs come down.”

Core-Mark is a distributor to the convenience market in North America. Janca is in charge of a fleet that provides distribution throughout Arizona. In Tucson he said the lack of a freeway system makes it difficult – and expensive – to move goods from one side of the city to the other. “The point is that local economies flourish when the area is easily accessible.”

Janca said that completing a beltway around Phoenix will improve the entire metro area’s ability to maximize its position on the I-10 as a gateway from the Port of Los Angeles to the rest of the country.

Other Laveen residents also have been supportive.

“It would be great. Traffic would be a whole lot better,” said Juan Salais. “We need that freeway.”

Fernando Ibarra, formerly of Laveen and now living in Tolleson, agrees. “The freeway would alleviate congestion off the I-10 and the I-17 and major roads that run east and west that are south of the I-10.”

However, many locals, including residents of the neighboring Gila River Indian Community, are among the freeway’s opponents. After years of debate and negotiation about possibly allowing it to pass through tribal land, the tribe voted in 2012 to oppose the freeway completely.

That vote means the alignment stays off tribal land, but will pass through a small portion of South Mountain Park. Many Native Americans consider South Mountain a sacred area and there are multiple groups that oppose the freeway’s construction based on its cultural impact.

Andrew Pedro, a member of the Akimel O’odham Youth Collective and Gila River Indian Community, said he wants to stop the freeway by any means necessary.

“For O’odham people this isn’t just destroying a mountain; it’s destroying part of who we are,” Pedro said. “Moadak Do’ag (South Mountain) is a sacred place and desecrating it is an attack on our cultural integrity and freedom of religion.

“I was born an O’odham and I feel like it would be an insult to my ancestors not to do everything I can to protect our sacred places. If we have to stand in the way of tractors then so be it.”

He also said that PARC’s lawsuit will benefit other opponents such as the collective.

“It will bring more awareness to the issue seeing that the project is being opposed on that level,” Pedro said. “Also, it shows that not only indigenous people are resisting the freeway. PARC’s lawsuit, I think, will at least slow down the process of construction. I hope it ultimately stops it all together.”

Lawlis said the Attorney General’s office responded by asking that the group’s attorney, Howard Shanker, withdraw a request for a temporary restraining order to stop work and to drop their motion for an injunction to halt the project permanently – something the coalition is not likely to do.

This article first appeared in print on June 7, 2015 in the South Mountain District News.