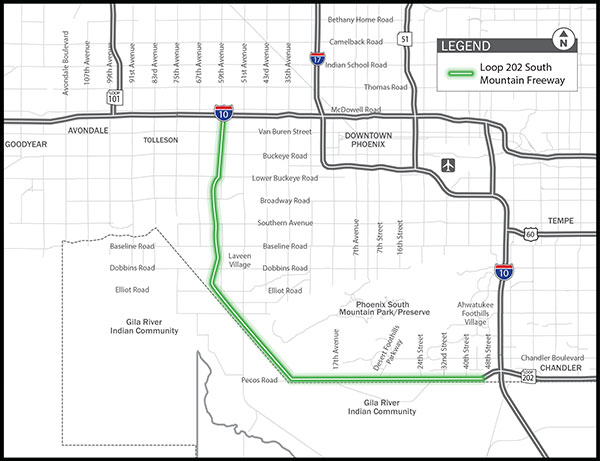 This a press release distributed Sept. 21 by the Arizona Department of Transportation.

PHOENIX – Planning for the South Mountain Freeway took into account rapid growth expected in the East Valley and West Valley and the substantial time savings drivers will see from having an alternative to an already strained Interstate 10 through downtown Phoenix.

A West Valley resident will see similar time savings heading to the East Valley or destinations south along I-10, including Tucson, according to the projections.

Identifying the South Mountain Freeway as a way to help keep the region and its economy moving forward, the Arizona Department of Transportation, Maricopa Association of Governments and Federal Highway Administration considered the social and economic cost of time lost in stop-and-go traffic.

“We are building the South Mountain Freeway as a regional transportation solution,” ADOT Director John Halikowski said. “The need for a high-speed, efficient transportation corridor linking the southeast Valley and the West Valley dates back to the 1980s, when regional transportation planners foresaw the tremendous growth that was projected to occur in the area. Connecting people with employment centers and more in the East Valley and West Valley will benefit the region’s economy and quality of life, and the recent and projected population growth in Maricopa County has really driven the need to expand our transportation network in the Valley.”

ADOT plans freeways for the future, and what the future holds for the Phoenix metropolitan area is continued growth in parts of the East Valley and West Valley that will be connected most directly by the South Mountain Freeway. As a result, these areas will see the greatest time savings while the entire region benefits.

When it opens in 2019, this long-planned link is projected to deliver a savings of 15 million hours of travel time, worth $200 million, over the course of a year. That’s time saved in stop-and-go traffic through the Interstate 10 Broadway Curve, the portion east of downtown Phoenix that runs through Tempe and on surface streets where motorists try to get around freeway slowing.

As the regional transportation planning agency responsible for determining which highway projects are funded in the Valley, the Maricopa Association of Governments developed these and other projections through transportation modeling, socioeconomic modeling and other means in coordination with ADOT and the Federal Highway Administration. The results demonstrate the clear need for and clear benefits from a South Mountain Freeway.

According to the Maricopa Association of Governments’ projections, Maricopa County will have 2 million more residents in 2035, many of them commuting to the 1.2 million additional jobs forecast for the region. And about half of that growth, which includes 700,000 additional dwellings, is expected in areas that will benefit most from the South Mountain Freeway.

Transportation planners estimate that up to 190,000 vehicles will use the South Mountain Freeway each day in 2035, which is comparable to other Valley freeways.

“Benefits of completing the freeway will be felt immediately, as drivers will have alternate routes to choose from,” Halikowski said. “Time lost while stuck in stop-and-go traffic, especially on the strained I-10 corridor through downtown Phoenix, already costs the region’s economy. As the Valley continues to grow, that time cost will grow along with it.”

The Broadway Curve sees nearly 300,000 vehicles per day, making it one of the region’s most congested areas as drivers head to and from the East Valley and points south on Interstate 10. With the South Mountain Freeway in place, traffic volume along this segment is expected to be reduced by approximately 32,000 vehicles.

The South Mountain Freeway also will alleviate growing congestion on local roadways such as Baseline Road and Southern Avenue.

The South Mountain Freeway will run east and west along Pecos Road and then north and south between 55th and 63rd avenues, connecting with I-10 on each end.

ADOT started the first phase of freeway construction this week at the I-10/Loop 202 interchange. As part of the South Mountain Freeway project, crews are widening the shoulders and extending the existing Loop 202 high occupancy lanes (HOV) lanes from Pecos Road near 48th Street to the I-10/Loop 202 interchange.  This initial phase of construction will be completed prior to work starting on the mainline freeway, which is scheduled to begin in early 2017.