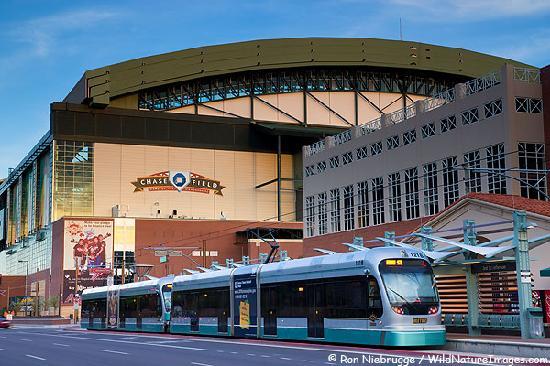 “I think it’s going to be an economic engine for our community,” said Petra Falcon, executive director of Promise Arizona and an active community leader in helping get Proposition 104 passed in August 2015, which will help pay for the city’s improved transportation plans known as Transportation 2050.

Lars Jacoby, spokesman for the Phoenix Public Transit Department, said ridership on public transportation in the south central Phoenix area is among the highest in the city, with Council Districts 4, 7 and 8 all showing more than 20,000 weekly riders. He said that is part of the reasoning behind the city’s decision to expedite transportation plans in the community.

“Because south Phoenix has a significant transit ridership, many of whom are dependent on transit as their sole means of transportation, combined with the strong federal interest in this project, the Phoenix City Council supported the recommendation to accelerate this project,” he said in a statement.

“It creates a lot of opportunity for balance between being too excited and understanding the work that needs to happen now that the timeline has been shortened,” Vidales said. “Before light rail comes in there have to be programs in place to assist residents and business before, during and after construction.”

Jacoby said city officials have learned from light rail construction elsewhere in the Valley how to better mitigate the impact construction can have on residents and small businesses. Jacoby, who also lives in south Phoenix, says the city will be proactive in listening to concerns from residents and the multiple mom-and-pop business owners.

“Families and businesses will all benefit from the connectivity and be able to thrive,” Falcon said. “But we have to make sure that we work to protect our long-term residents and businesses along the construction route.”

“We have a lot of mom-and-pop stores and a lot of diversity, schools, churches and other institutions along the route,” he said. “They must be brought into the conversation. We also are being taxed as community leaders to come together with the city and Valley Metro to get the most comprehensive plan that we can by working together and not conflicting with each other.”

Councilman Michael Nowakowski, D-7, supports the plan and believes it will bring long-term economic prosperity to the area.

“The extension will promote much needed economic activity, including affordable housing, commerce and other development,” he said. “Businesses along the completed light rail line will see an influx of customers as the area becomes a hub for economic development.”

Phoenix Mayor Greg Stanton began pushing for the transportation proposal in 2014 when he established a citizen’s committee to draft a plan in advance of 2020, when the city’s .04 sales tax was slated to end.

“Because Phoenix voters made a historic investment in public transit, we’re able to accelerate high-capacity transit projects to meet more immediate community and mobility needs,” Stanton said in a statement. “The adjustments to the transportation plan are critically important to further the city’s economic development, sustainability and accessibility goals.”

Phoenix City Council approved the plans on Jan. 26, which include accelerating segments of the future high-capacity/light rail transit system to advance into the Regional Transportation Plan. The changes will be sent to the Valley Metro Boards of Directors and the Maricopa Association of Governments Regional Council for discussion and final adoption into the plan this summer, according to the city’s announcement.

Jacoby said that as plans move forward, city officials will undertake several steps to assist businesses and residents during construction.

“Over the last four years, transit staff has worked with the community and businesses to obtain input for the future light rail extension into south Phoenix. That outreach has shaped the next steps Phoenix and Valley Metro will take to prepare stakeholders, specifically business owners, to develop and implement an early action business assistance program,” Jacboy explained.

Some of those steps will include: meetings with business owners to understand their concerns, their business models and needed resources. There also will be business support meetings and workshops, city partnerships with local non-profits, business chambers, community-based organizations, and others that specialize in small business assistance.