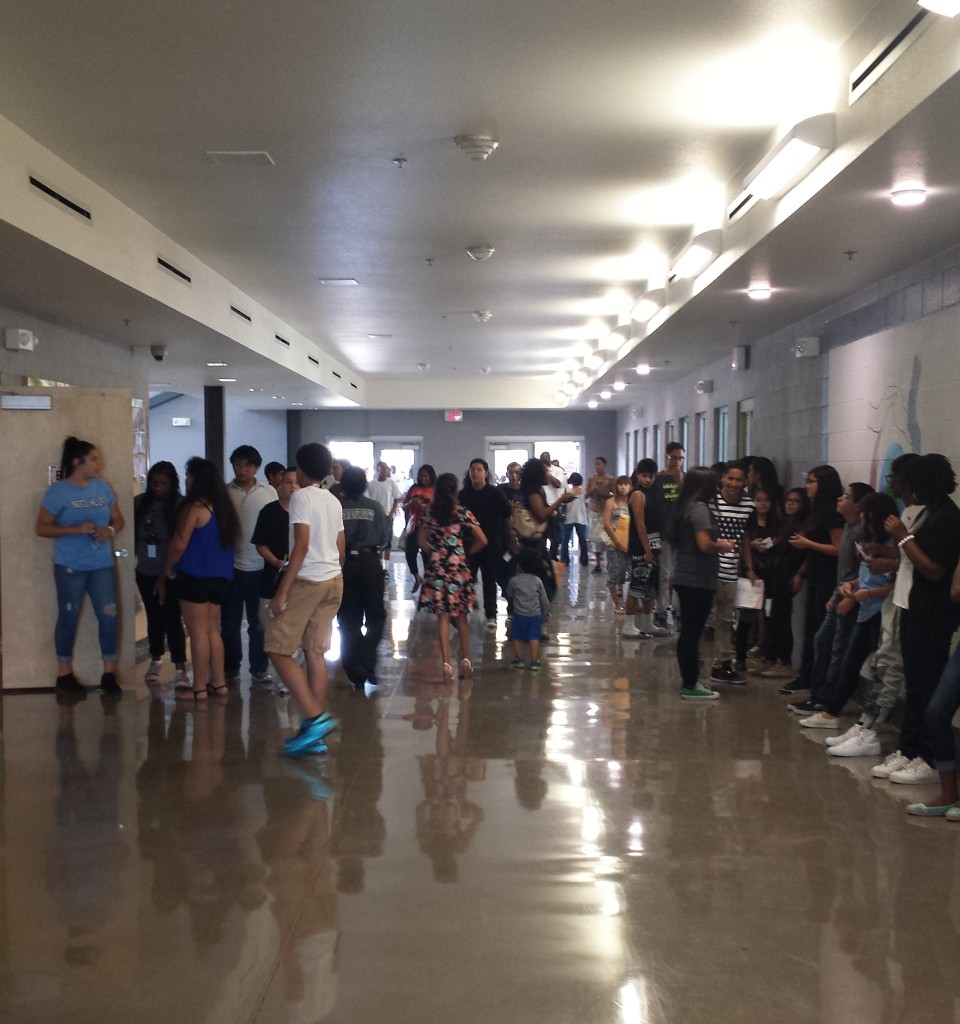 By Rose Tring
For the South Mountain District News

“That’s a big initiative for us,” says new Principal Phillip Wooley. “We want to reward and recognize positive behavior.”

“We are hosting a Chinese foreign exchange student this year,” said Wooley, who lives with his family in Laveen. “I would not bring a child into our home or our school if I thought there was any issue of safety.”

In September of last year, three bomb threats naming the school as a target were made within four days, causing class disruptions, school evacuations and a flurry of negative media attention. In another incident last fall, the school was locked down when a suicidal teen had a gun in the classroom.

Residents of the rural Phoenix suburb took to social media to voice fears and complaints, becoming very vocal in blaming school officials and condemning youth for outrageous behavior. No one was injured in either instance, nor has anyone been arrested to date for making the threats, according to Phoenix Union High School District officials.

“When the bomb threats happened again and again last year that was pretty unique for us,” said Craig Pletenik, community relations manager for Phoenix Union, which includes Fairfax, Cesar Chavez and South Mountain high schools. “The timing was unfortunate and what happened there seemed to be amplified by social media.”

Randy Schiller, a Laveen resident with a son starting as a senior at Fairfax this year, has served on the district’s governing board since 2010. He was elected to a second term this year. Schiller and his family live within a few blocks of Fairfax High School.

“There is definitely going to be more focus on safety,” Schiller said of new school year. “But parental involvement is a big part of that. If there are more parents on campus, then there are more adult eyes.”

“We really want to build pride in what we have in Laveen,” Schiller said.

Pletenik supplied a list of the infractions districtwide from the 2014-15 school year. There are 16 schools in a 220-square-mile area in the Phoenix Union High School District, representing nearly 31,000 teenagers. Major infractions are considered assaults, fights, bullying, general harassment, weapons or dangerous items, alcohol or drugs, sexual harassment and threats to educational instructors.

All in all, the numbers reflect a small minority of troubled students on district campuses, according to Pletenik. “You have to be careful of statistics. Some of the higher rates reflect that some schools are more strict, which doesn’t translate to them having more issues,” he said. “Ninety-seven percent of our students never commit a major infraction.”

For the 2014-15 school year, only four students districtwide were expelled; two of those had attended Betty Fairfax High School. Wooley and Pletenik say that expulsion and suspension are final resorts after other types of interventions have failed. Fairfax offers numerous programs from tutoring to counseling to peer advisory groups with the goal of supporting children. A notable one is Positive Behavior Intervention Systems and Support, or PBISS.

New signage reminding students of appropriate behavior specific to hallways, classrooms and the cafeteria is part of the new focus on PBISS. The idea is to reward individual students with Stampede Bucks for adhering to the rules and setting good examples. The Bucks can be used to purchase “game cards” that grant cardholders the privilege of playing on arcade-style games that are located in school’s four main campuses. Wooley said that instead of having study hall, for example, students can take some time to shoot some mini hoops if they’ve earned a game card.

Shirley Waltenberg is the president of the Fairfax High School Band Boosters and her daughter is a senior this year. She has nothing but praise for how school officials handled the challenges last year.

“They did the best they could. They did the drills like they were trained,” Waltenberg said of the evacuations after the bomb threats. “Things happen at any school where there are hormonal teenagers.”

She said her daughter is enrolled in the International Baccalaureate program (IB), and that most classes contain 12 to 15 students. “These are kids who want to be there.”

Schools have to meet stringent requirements to teach the IB program. The curriculum is recognized by top universities and college worldwide. According to Greatschools.net, IB programs set high standards for learning, emphasizing creative and critical thinking. The program also focuses on research and encourages students to learn from their peers.

“We’re really, really pleased with Betty Fairfax,” Walternberg added. “We’re happy with the level of safety and education. My daughter has never felt frightened or threatened.”

Dawn Tetesco’s daughter plays varsity volleyball and participates in numerous clubs and activities at the school, including the National Honor Society. Her daughter is a senior this year and has focused on taking classes throughout her four years that also count toward college credit.

“I think she’s getting a great education,” Tetesco said. “She’s helping with freshmen orientation and is always volunteering on campus.”

Wooley, whose younger son is a Fairfax graduate, said he takes a very personal interest in his school and its reputation. During a tour of the high school, he noted that he was the first teacher to sign a contract to teach there when it opened in 2007. In the past eight years, Wooley has worked his way up to assistant principal before being named to the top position this year.

Schiller said Wooley joins two other principals, including Schavon T. Waggoner at Cesar Chavez and Kate McDonald at South Mountain, participating in a new program to support newer principals. Phoenix Union has put in place Scott Gayman as a mentor to the three. Gayman is a longtime resident of the area, and the former principal at Cesar Chavez. His role will be to support and guide the three principals.

“He lives in the community; he knows the community,” Pletenik said of Gayman. After a shooting in January 2015 during a basketball game between Fairfax and Cesar Chavez, Gayman initiated a rule that no one other than students from the two competing schools could attend sporting events at Cesar Chavez. Four youth were arrested in that shooting – no one was injured but about 15 shots were fired – and none of them attended either of the two schools.

“It was a very restrictive measure, but very effective,” Pletenik said.

But many Laveen residents still contend safety remains an issue with several residents saying they called news outlets to alert them to the bomb threats and evacuations last year.

“I really wish the media wouldn’t report on these incidents,” Pletenik said of the bomb threats. “It can get blown up. And I know that sometimes it makes schools look like they’re being played by the culprit. But if there was just one time when we didn’t react, would that embolden the person to do worse than make threats?”