Laveen Teacher Retiring After 30 Years in the District 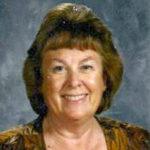 This article first appeared in the November issue of the South Mountain District News.

In 1986, the population of Laveen was just shy of 10,000 residents. There were two elementary schools and one high school.

Cotton fields were more common than street lights and the Central Arizona Project had just been completed, bringing water from the Colorado River to flow into a burgeoning Phoenix metro area on the brink of enormous growth.

After earning her bachelor’s degree in education from the University of Wyoming, Jeannette “Jan” Hoskovec had been teaching in Wyoming for three years in the economically depressed state. She heard about the growing opportunities in the desert and decided to move to Arizona, nabbing her first job as a substitute teacher in the Laveen Elementary School District in 1986.

“When I started out here, it was more rural,” Hoskovec recalls. “There was nothing down on Baseline Road. It was a two-lane road. There was the little shop at 51st and Baseline, the Laveen Store, and that was the only grocery store.”

Hoskovec’s part-time gig quickly evolved into a full-time teaching position and now, three decades later, she is preparing to retire in May after teaching two and sometimes three generations of Laveen families, mostly at Laveen Elementary School.

“I have had the parents of my students come to my class. I am now teaching their children. You build these relationships with these families,” she said. “I tell the kids, ‘I know your parents. They know what type of person I am and my expectations.’ Some of them I know their whole families.”

While family names may be the same, other aspects of education in Laveen have changed significantly during Hoskovec’s years of teaching mainly social studies to local students.

When her career in the Laveen district began, there were only two schools: Laveen Elementary, then housed in a 50-year-old structure on the southeast corner of 51st Avenue and Baseline Road, and M.C. Cash. Both schools have since been renovated with M.C. Cash opening at its new location in 2013.

Hoskovec moved with the rest of the Laveen Elementary team to their new site in 2011. She praised the district for its efforts to keep up with the phenomenal growth of Laveen, which now has nearly 70,000 residents, and of the district, which opened its 8th school this fall to help serve nearly 7,000 children from preschool to 8th grades.

“We have seen a lot of growth out here. From two schools to now eight,” Hoskovec said. “You have more diversity in your student population this way. But you lose the smallness – though there are still families who live out here who have grandparents here.”

Of all the changes, though, she said technology has had the biggest impact on teaching and interacting with students and parents. She remembers doing report cards using carbon paper. “Now we have programs and you print out things.”

“The pendulum just swings every so often. My whole teaching style has changed … I use technology all the time,” she said. “Students and parents can go online on and see grades any time.”

“Laveen has been good about getting this technology to us and training us,” she said “It’s very interactive. I can do a PowerPoint and the kids can do the answers. I have a web page so parents have access to that,” Hoskovec said. “You can teach an old dog new tricks. Technology is there to make our lives easier.”

Dr. Bill Johnson, superintendent for the district, said Hoskovec’s contributions over the years are much appreciated.

“Teaching has a ripple effect, not only on the life of the student, but everyone that the student eventually associates with during their entire life. With 30 years of dedicated service to the students of Laveen, Ms. Hoskovec’s impact has spanned multiple generations and the positive effects and the numbers of lives that have and will be touched are incalculable.”

An avid traveler all her life, Hoskovec is making plans for seeing more of the world when she retires in May. Her sister lives in Norway, so Europe is on the agenda as well as seeing more of the United States and its national parks.

“I love to travel. Education has allowed me to do that. I have seen a lot of the world. I have been to all but about nine states – that’s my bucket list,” she said. “And I want to go to more national parks. Because I’m over 62 I can get into state parks for free.”

But Hoskovec is taking lasting memories with her, and a great deal of satisfaction.

When my kids come back to me – several high school kids – I ask them how they’re doing. And they usually tell me ‘you were right about everything,’” she said. “They all come back and tell me that. It’s neat because then I feel like I have done my job. That’s why I became a teacher. They know I care about them. I never married; I consider all these kids to be my kids.”