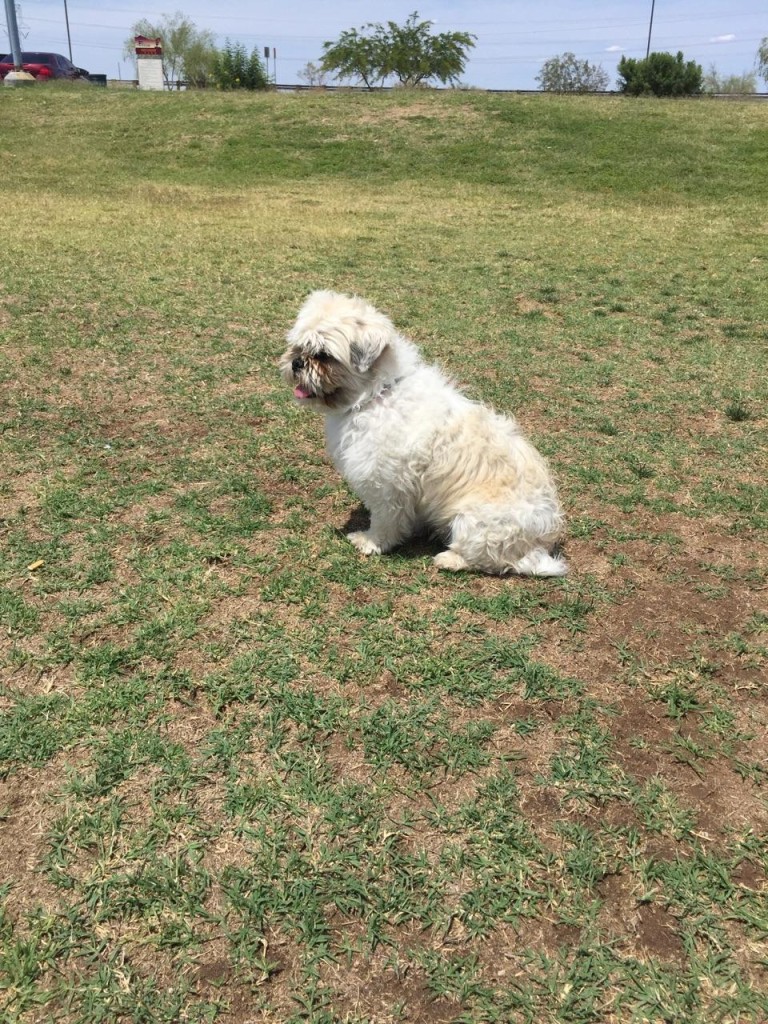 What started as a frolic in the fields of her father’s home near Estrella and 51st Avenue, turned in to three days of anguish for Dinahlee Ochoa, 21, a lifelong resident of Laveen, and Coco, her 4-year-old Shih Tzu.

But thanks to the power of social media and a community’s love for of animals, the two are together again.

Dinahlee lives in the Rogers Ranch neighborhood near 43rd Avenue and Baseline Road, but she said that they decided in late May to visit her dad’s horse property off 51st Avenue to give Coco some room to run around in the fields and play with the other dogs. Except on May 18, Coco didn’t come back from his rambles.

Two hours of searching and calling for the little white dog brought no luck. Dinahlee returned home, worried about coyotes and fearing for Coco, but decided to take a chance and asked her cousin if he would post on some of the Laveen Facebook pages about her missing dog. She doesn’t have a Facebook account herself. So Esteban posted:

My cuzins shih tzu Coco ran off from our ranch on 51st avenue and Estrella in Laveen. South of dobbins. He’s white and is very furry. He was wearing a gray collar with silver rhinestones. He was last seen between Estrella and Carver down 51st ave. If found please call 480 822 8367 or 602 476 9567.

As I was on my way to work this morning I find this little guy stuck in a tumbleweed on 51st av and carver! He has a collar so I’m hoping he has an owner. But judging by the condition of his fur it looks like he hasn’t been cared for in a while! If you recognize him please contact me!

A flurry of comments followed Nick Smith’s post, with dozens of offers to help from people who had remembered the first post about Coco from three days before. By midmorning, mutual friends had connected Nick to Dinahlee, who gave a positive ID for her missing dog. After he finished work on May 22, the founder drove Coco home to his joyful owner.

“Within three days he was home,” Dinahlee said, a few days after her reunion. “I couldn’t believe that the Facebook post worked and we got him back safe.”

TAGLINE: Writer Rose Tring is a long-time journalist and owner of AZ Media Maven, a Laveen-based marketing and public relations company. She is also the founder of FinditinLaveen.com, a local business directory and free community calendar. Email her at rose@azmediamaven.com