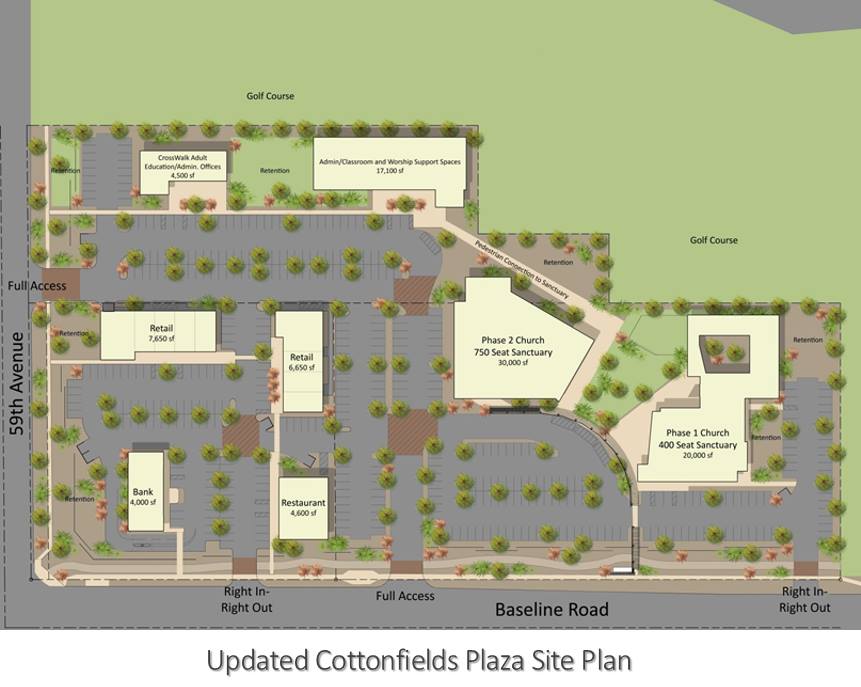 This article first appeared in the print edition of the South Mountain District News on Aug. 4, 2016

An emotionally-charged proposed zoning change for the former driving range near the Cottonfields neighborhood in Laveen foreshadows what likely will be many such debates about how development should unfold in the rural Phoenix suburb.

Village planners take up the issue at 6:30 p.m. Monday, Aug. 8 during their regular meeting at the Laveen Education Center, 5001 W. Dobbins Road.

Developers are seeking a change from a golf course zoning to C-1, the least intense commercial zoning the city of Phoenix offers, to accommodate a proposed 8-acre church campus, a restaurant, bank and some small-scale retail. The 18-hole Southern Ridge Golf Course is not part of this proposed development and no changes are planned to the course that meanders throughout the gated Cottonfields community.

At an early August meeting of the Laveen Citizens for Responsible Development, about 45 people came to hear about the proposal and give their views. The debate showed a community clearly divided with several residents saying the land was zoned for a golf course and should remain for that purpose. Others argued the church needs a home and the small-scale retail would be a welcome replacement to the dried-up driving range that is no longer in use.

“We bought here about 13 years ago. It was a golf course community and that’s why we moved there,” said Patrice Herring, who doesn’t want to see any change to the zoning.

Pastor Jeff Gunn, whose CrossWalk Church hopes to build if the zoning gets approved by city officials, appealed to listeners with a passionate plea for support, saying he and his board are committed to purchasing the land the minute the zoning is changed.

Phase 1 of the church’s plans call for a 400-seat chapel to be built on the eastern 5 acres of the site using 20,000 square feet for the structure, and a large portion remaining as open space for outdoor activities and events. CrossWalk then has one year after closing on the 5 acres to purchase the additional 3 acres for classrooms, administrative offices and a 30,000 square foot sanctuary.

“We are fully prepared to purchase the land,” Gunn said.

Gary Jorgensen said he is tired of the property being an eyesore for anyone traveling along Baseline Road. “It’s an ugly piece of ground. This proposal should be seriously considered.”

The nonprofit LCRD is a volunteer community organization founded in January 1999 when developers first began eyeing the rural fields of Laveen as ripe for development, about 12 miles from downtown Phoenix. Though not affiliated with the city, how the 10-member board votes on various city and county land-use issues often influences the Laveen Village Planning Committee’s decisions, as well as those of the City Planning Commission and ultimately the Phoenix City Council, as projects make their way through the planning process.

At the August meeting, members obviously were torn on how to proceed with this proposal.

Larry Lazarus, an attorney and partner at Lazarus, Silyvn & Bangs in Phoenix, presented a comprehensive site plan that he said already had taken into consideration multiple suggestions the board had made at previous meetings. He also noted that development is planned all four corners of the intersection at 59th Avenue and Baseline Road, which “is going to be 1000 feet from a new freeway.”

Lazarus represents Walter Chomichuk and Jaguar Premium Properties, which incorporated in 2012 when it purchased the 11 acres. Chomichuk is a general partner in Jaguar.

The South Mountain Freeway, which is expected to be completed by 2019, is a 22-mile roadway linking Interstate 10 to the north of Laveen with the Loop 202 near Awhatukee. Multiple commercial developments are planned in Laveen along its route, which runs roughly along 63re avenue, just to the west of the proposed Cottonfields Plaza development.

While development is inevitable, some longtime residents of the Cottonfields as well as some of the LCRD members would prefer the corner be preserved as green space.

Wendy Ensminger, president of the Laveen Association of HOAS and a resident at Cottonfields, said she moved to the area for its rural appeal. “I really think we should keep one of those four corners as green space in keeping with the character of Laveen. The rural open feel is what makes Laveen unique.”

In the end, board members voted against the measure 4-3.  However, after several audience members made more comments and the discussion turned toward what could happen if the Village Planning Committee, then the City Planning Commission and eventually City Council were to approve the zoning change without any input from the LCRD member.

Board members called for a revote and members voted 5-2 in favor of submitting the proposal with several strict stipulations including that the developer would have “substantial conformance” with the site plan; that the church would have five years to begin construction or the zoning would revert to G-C and that notifications regarding any changes to the site plan would be sent to all who signed up at the meeting as well as all residents within 1000 feet of the proposal’s property line.  Board members also noted that their actions do not stop homeowners from filing legal action to stop the process.

Ensminger and Bobbie McLeod, also a Cottonfields resident, both noted that their community has a unique contract from the former owner called a Reciprocal Easement and Maintenance Agreement (REMA). Article 5.1 of the REMA stipulates: “The golf course property shall be used solely and exclusively for golf course use or as open space and for no other purposes.”

Any changes to the REMA require a two-thirds vote of the 450 households in Cottonfields. Lazarus said he has never had to have a vote by homeowners on any proposal he’s made in his many years of working with developers and city planners.

Laveen Village Planning Committee meets at 6:30 p.m. on second Mondays at the Laveen Elementary School District #59,  5001 West Dobbins Road. The LCRD meets first Mondays at 7 p.m. in Building A at the same address.