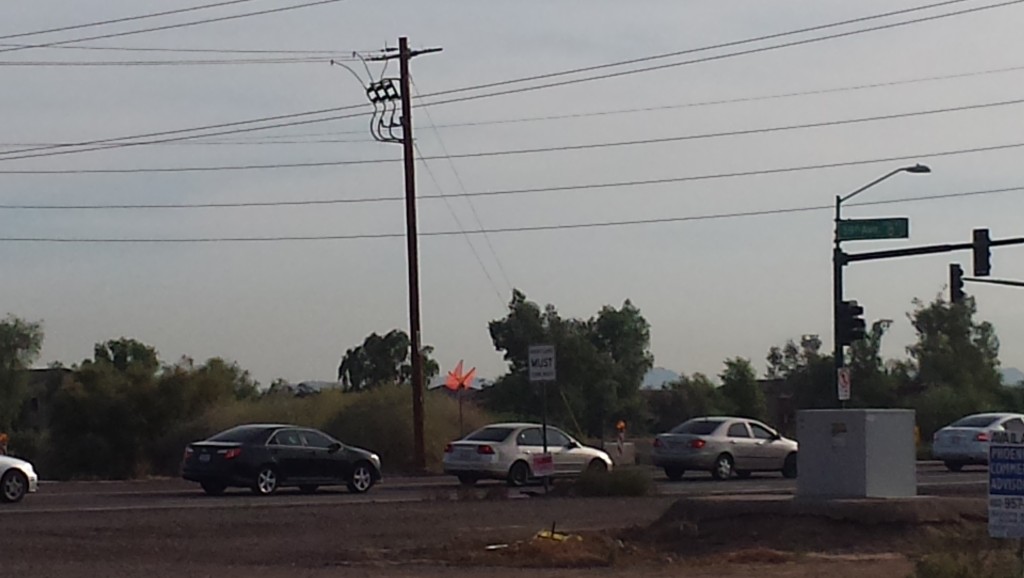 Whether it is rude drivers or four-lane thoroughfares that abruptly drop to two lanes, residents in Laveen find plenty to say about driving in the rapidly developing urban village.

The South Mountain District News asked residents to sound off on the topic and more than 80 people responded with what they considered the biggest traffic challenges in Laveen. Topping the list with nearly 30 comments were inconsiderate drivers. Respondents noted that it is common for Laveen drivers to pass on dirt shoulders, run red lights, cut off other drivers, tailgate, use turn-lanes as passing lanes, speed and try to multitask when driving.

The second most common complaint was Baseline Road with residents deploring the growing congestion and difficulty getting in and out of the Fry’s parking lot at 51st Avenue and Baseline and the narrowing of Baseline Road between 55th and 67thAvenues.

“One issue is going east (as you) either are heading back home or to work on that one lane of Baseline Road,” said Naomi Rae Krohn-Martinez, who has lived here about six years. “My child goes to Desert Meadows (Elementary School) and it’s just crazy heading west in that direction. They either need to extend the lane or fix the light on 59th Avenue and Baseline for better flow.”

Several others agree with her about the traffic congestion that builds up along Baseline in both directions, particularly during the morning commute time.

“By far the most dangerous traffic issue is two-lane roads merging into one lane,” says Robert Reichley, who moved to the area from San Francisco about 8 years ago. “One example is near Fairfax High School on Baseline going west. It merges into one lane and if buses are turning it gets ridiculous. Why would city planners allow all this growth in Laveen but not have the foresight (or common sense) to build two lanes on Baseline?”

“The collateral damages waiting to happen are Fairfax (High School) kids standing on the side of road there waiting, anxiously timing that first step of “Laveen Frogger” to get to the other side of Baseline,” Reichley said.

During the last week of August, that stretch of road was made worse when a city water line burst causing a sink hole and a portion of the road to fall away on the westbound side of Baseline between 59th and 61st Avenues. Traffic was diverted to Southern or Dobbins Avenues, causing an extra burden on those roadways. It was partially open several days later, but no one with city’s transportation department could confirm when final repairs would be made.

Other concerns voiced by residents included overall congestion, poor traffic light timing, issues with drop-off and pick-up at the various schools and dangerous intersections such as 51st Avenue and South Mountain where there is no light, but a pedestrian cross walk. Residents also worry about areas on Southern Avenue that narrows from four lanes to two, intersections at 51st and Southern and 35th and Southern Avenues.

“All of the above,” agrees Martina G. Velasquez, who is nearing the 10-year mark as a resident of Laveen. “As pointed out by several people, we need road improvements desperately. It’s unfortunate that because of our semi-rural character we are unable to resolve so many of these issues. The road narrowing, for example — the City of Phoenix won’t pay to widen it and neither will Maricopa County. I see some of the most reckless acts in those areas.”

Jon Kimoto, a member of the Laveen Village Planning Committee since 2005, says Velasquez has it right that is difficult to hammer out transportation issues in Laveen. The committee is made up of members appointed by the Phoenix City Council and mayor to guide decisions and policies for Laveen.

About 45,000 residents live in the area, most under the jurisdiction of the City of Phoenix, according to the 2010 U.S Census. But Laveen also has several large portions of land that fall under Maricopa County, and then further south and west, land is owned by the Gila River Indian Community. The Arizona Department of Transportation also is in on the discussions as it prepares to build the South Mountain Freeway roughly along 61st cutting through both city and county land to connect with Interstate 10 on both ends.

“That’s one of our biggest challenges,” Kimoto said. “We have to coordinate with the county and the city to make sure traffic goes the way it should, along with drainage, flood control and planned development.”

City voters approved Proposition 104 on Aug. 25 in a citywide election, giving the nod for $17 billion in transportation projects over the next 30 years to be paid for through a sales tax increase. Included are more than 100 miles of new sidewalks, 1,000 miles of new bicycle lanes, expanded bus services and about 40 miles of additional light rail lines.

While none are specific to Laveen, the area will benefit from a quicker turn around on road resurfacing projects and expanded bus routes, according to Kerry Wilcoxon, who works for the Phoenix Safety and Neighborhood Traffic Section. Wilcoxon said that for any of the safety concerns raised by residents – such as the crosswalk at South Mountain and 51st Avenue – then he is the city person to contact.

“The best way to request assistance is to contact me, if it’s regarding safety,” he said.

Wilcoxon noted that the traffic congestion along Baseline Road where it narrows to two lanes also is tied up in the development plans for the South Mountain Freeway.

Although he could not provide specifics, he said improvements on Baseline likely will wait until the ADOT begins construction on the proposed freeway, which is expected to be completed in 2020, and the related off-ramps that might intersect with Baseline Road. Current plans call for an exit ramp from the freeway at Baseline Road.

Kimoto said the key for Laveen will be ensuring road improvements are planned that will accommodate the coming development along the freeway corridor.

But residents already are worried as multiple new businesses are being built along Baseline between 51st and 55th Avenues. Several people are worried that the new stores will cause even more congestion at 51st and Baseline. Wilcoxon said that intersection was built with the anticipation of the new development and should be ready for the increased traffic load.

Another concern is the timing of traffic signals. “The traffic light timing is terrible and could help with traffic flow, especially between 51st and 67th,” Velasquez said.

Wilcoxon said such issues also can be addressed by the city with observations made during the high-congestion time to see if having the light at 55th Avenue change more frequently would alleviated the backup along Baseline Road.

As for the irritating or downright dangerous driving habits, Wilcoxon said that the best thing for residents worried about speeding, people running red lights and other traffic violations to do is contact the city’s traffic complaint hotline, 602–534–SPEED (7733), which connects callers to Police Officer Toby Erhler.

(This article appears in the September print edition of the South Mountain District News and be read online at the paper’s site through this link: Residents Sound Off on Local Traffic Issues  )