While plans are still evolving for next month’s celebration, the Wadhwas and Scooptacular intend to offer 60 cent cones, schedule a visit with members of the Phoenix Fire Department among other activities that are still being finalized.

Six years ago in 2010, the couple noticed that Laveen was lacking in family-friendly destinations. The economy was being battered, foreclosures were through the roof and businesses were closing – including the Cold Stone Creamery location in Laveen, which they transformed into Scooptacular.

The Wadhwa family wanted to create a destination for families but to also help put Laveen on the Valley maps. “Our original vision statement was ‘to be a beacon of hope to the community of Laveen’.”

“Our friends thought we were crazy to leave a stable job and open a business in this negative environment,” Nindi said. “We just knew Laveen needed something positive.”

Scooptacular makes all its own ice cream in Laveen. The company sources ingredients from all over the world with vanilla beans coming from Madagascar and Indonesia. Chocolate powder is imported from Belgium.

Nindi said he has customers drive from all over the valley to visit the Laveen location, one of the reasons that Scooptacular expanded last fall. In October 2015, they opened a location in Gilbert. Ice cream for both locations is all still made in Laveen. In addition, Nindi said several valley restaurants now serve ice cream made by Scooptacular under a private label.

Their secret ingredients also include their employees, or Scoopies. “They are like an extension of our family,” Nindi said. 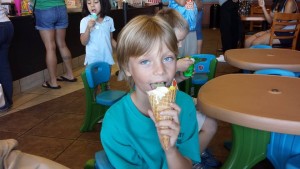 All Scoopies are required to read one to two  books per year and year one always includes  “The Total Money Makeover,” by Dave Ramsey. “We want our Scoopies to have a solid foundation as they grow with us and move on,” he said.

“Jocelyn, one of our Scoopervisors, has been with us since the very beginning. Watching her grow has been rewarding. She is our lead cake decorator, and is integral in our training of new Scoopies. And, our manager, Kalani, joined us one month after we opened. He has been a key player in Scooptacular’s success. His ability to connect with customers can be seen by his warmth when you walk in.”

In addition to their dedication to a quality service and product, the Wadhwas are committed to improving the quality of their community, where they live, attend church and their children attend school and take part in local activities. Scooptacular is a frequent sponsor of local youth groups and school events.

“We love being part of the Laveen community and putting Laveen on the map. This is such a great place to live and we want others to know about our little community out here,” he said. “We look forward to the next six years here with you in Laveen and watching the Scooptacular brand grow throughout the Valley.”

Over the past six years, Scooptacular has been seen on CNN, CBS and locally on nearly every Valley news station. The ice cream shop also been nominated as a “Best Of” by the New Times. Scooptacular received Blue Ribbons on their vanilla and strawberry flavors in 2015 at the National Ice Cream Convention, the highest award possible in ice cream quality.